The suspiciously fake flying disc had a white light in the center. Image Credit: YouTube / SWNS TV
Dubious footage of a gigantic disc-shaped object filmed in Malaysia has gone viral online this week.
The video, which looks like something out of the 1996 science fiction blockbuster Independence Day, shows a large flying disc hovering over a village in the Kuala Krai district of Malaysia before looping around and performing a much slower pass over the area while tilted on to its side.

The footage has since gone viral on social media in Malaysia and has caused such a stir that local police have reportedly found it necessary to issue a statement calling for everyone to remain calm.

Elsewhere however the 'UFO', which has been widely dismissed as a hoax, is thought to be more the product of computer graphics software than it is genuine evidence of extraterrestrial visitors.

#36 Posted by RCMerchant 6 years ago 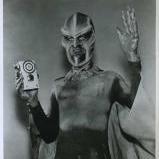 I agree-it's REAL-! To bad the quality isn't as good as this footage! It even shows the Mothership!

#37 Posted by JesseCuster 6 years ago

When UFO videos of dubious or or no provenance originate on dubious clickbait UFO YouTube channels, then saying "it's fake" is probably a safe bet.

#39 Posted by TheGreatBeliever 6 years ago

UFOs before world war two would be more legit. Cos with technology these past few decades, humans could easily create a flying saucer. Mind u there r photos of them even before the second world war..

#40 Posted by Kurzweil 6 years ago

Actually that gif you posted is from the real alien autopsy at area 51.

#41 Posted by Noteverythingisaconspiracy 6 years ago

I guess you are going to provide us with evidence of how to easily built a flying saurcers ? What technologies have we developed in "these past few decades" that would allow anything like what people associate with flying saucers ?  I am looking forward to your reply, because you wouldn't make a statement like this without some sort of evidence, would you ?

#42 Posted by badeskov 6 years ago

#43 Posted by TheGreatBeliever 6 years ago

Don't know wat era u are in, but u could google it. It was already announced/exposed that there r human made flying saucers..

#44 Posted by Noteverythingisaconspiracy 6 years ago

In that case it should be easy for you to answer my question............ shouldn't it ? Just asking me to google it makes me think that you don't actually have anything to back up what you are saying....... Apparently I live in an age where we use more letters than in your era.

#45 Posted by freetoroam 6 years ago

To many people who never saw any man made flying thing,  this would have been a UFO sighting: well before ww2: https://en.wikipedia.org/wiki/Otto_Lilienthal and when they started to have engines, again, to those who never saw anything like this, = UFO:   http://www.history.com/this-day-in-history/first-airplane-flies   With the invention of kites and balloons =  the UFO phenomena really started to escalate.. note, kites and balloons appeared well before the second world war.  Could you provide a photo of a UFO - pre ww2, which is not a fake, an early plane, a balloon or a test machine made by ... [More]

Click here to view all 45 comments on this story

anyone build their own computers?
UK and Europe