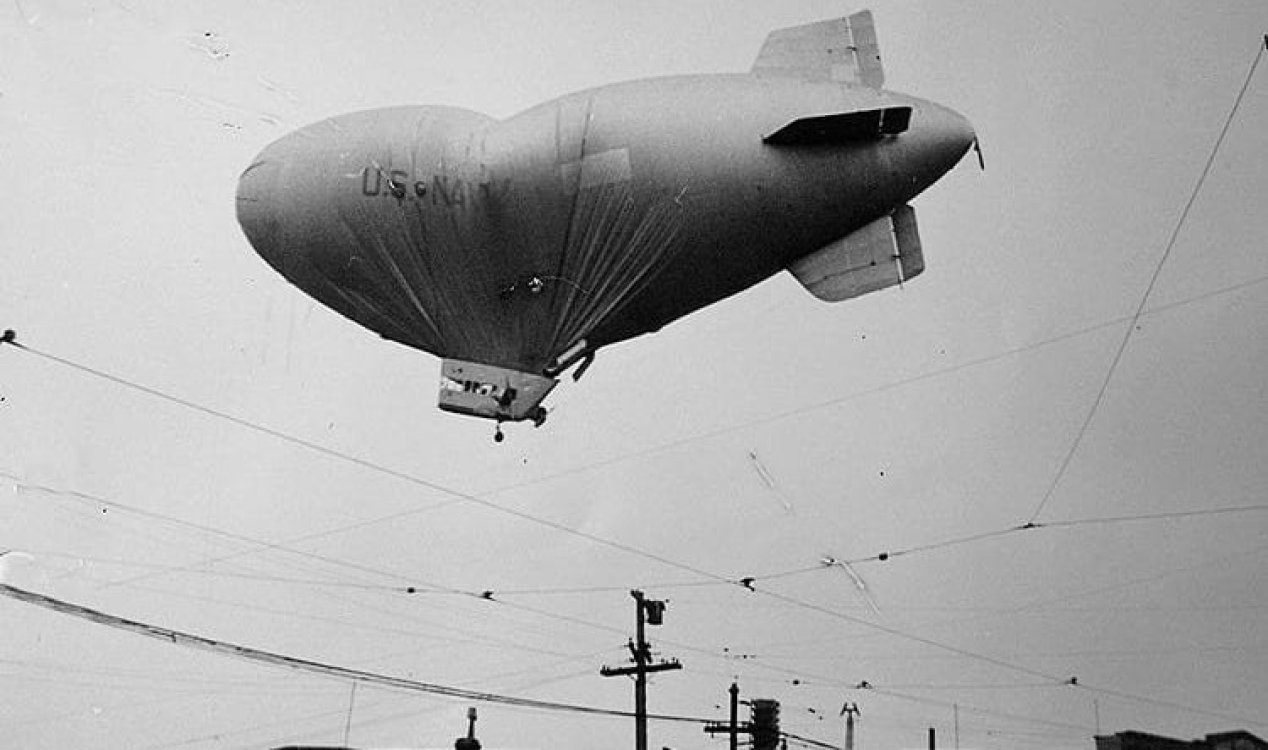 A photo taken of L-8 after its crew had disappeared. Image Credit: US National Archives
In August 1942, an airship disappeared, then reappeared again a few hours later with all of its crew missing.
The blimp, designated L-8, was a United States Navy L-class airship which took off from Treasure Island, San Francisco, California and promptly disappeared over the ocean near Fort Funston.

When it reappeared again a few hours later, however, something was wrong - the airship was acting as though nobody was in control and a short time afterward it came down south of San Francisco.

Upon investigating the crash site, investigators discovered to their surprise that there was no trace whatsoever of the two crew members who had been on-board when the blimp had taken off.

Even stranger still was the fact that the parachutes and emergency raft were all accounted for and the airship's radio systems were all functioning, meaning that if there had been a problem, neither of the crew members had made any attempt to signal for assistance.What's more, there was no evidence of any damage or mishap that might have befallen the airship.

It seemed as though the crew had jumped out over the ocean for no apparent reason.

An extensive search and investigation into the incident ultimately yielded no explanation and no trace of the two crewmen was ever found.

Even today, 80 years on, what happened to them remains a total mystery.

Next story >>
8 billion people: how evolution has made our species so successful
Recent comments on this story

#6 Posted by DreadLordAvatar 13 days ago

#7 Posted by jethrofloyd 13 days ago

''Perhaps the most plausible explanation came from Watson. Besides being in command at the time, he had had years of experience with L-type aircraft. Since the last message received from Cody was “am investigating oil slick,” the usual procedure would have been for co-pilot Adams to drop a smoke tracer to mark the spot. The L-8’s windows were small, and he might have gone back and opened the door. Kneeling in the aperture, leaning out to make his throw accurate, he could have slipped, grabbed the side of the blimp, and shouted to Cody. The latter, hearing his mate’s cry, probably would have le... [More]

Very interesting. Life jackets taken,,,? It certainly looks like the two prepared to jump ship. Maybe the craft lost power and they two crewmen jumped out, and with less weight, the ship went back up. Maybe. I don't think it's anything inexplicable, though.

I don’t believe it has anything to do with Alien Abduction or the Supernatural. Here  is the US Navy investigation into the event.   The Mystery of the L-8: https://www.usni.org/magazines/proceedings/1970/march/mystery-l-8

That’s a interesting idea, and basically it’s as good as any idea as any other, yet it doesn’t explain why the crew was never found. I think the crew saw a submarine, I also think they used their onboard depth charge to try and destroy it. But, for whatever reason they decided to jump  off and then they were Captured and taken aboard the Submarine. ‘Here is the Government report from the US Archive. https://www.usni.org/magazines/proceedings/1970/march/mystery-l-8

That report sounds the best, but the yellow life jackets never found is puzzling.

Yea I thought the information in the Government Report was also very good, but like you said it is strange that Yellow Life Jackets would just disappear.

Based on what evidence?

#15 Posted by ThereWeAreThen 3 days ago