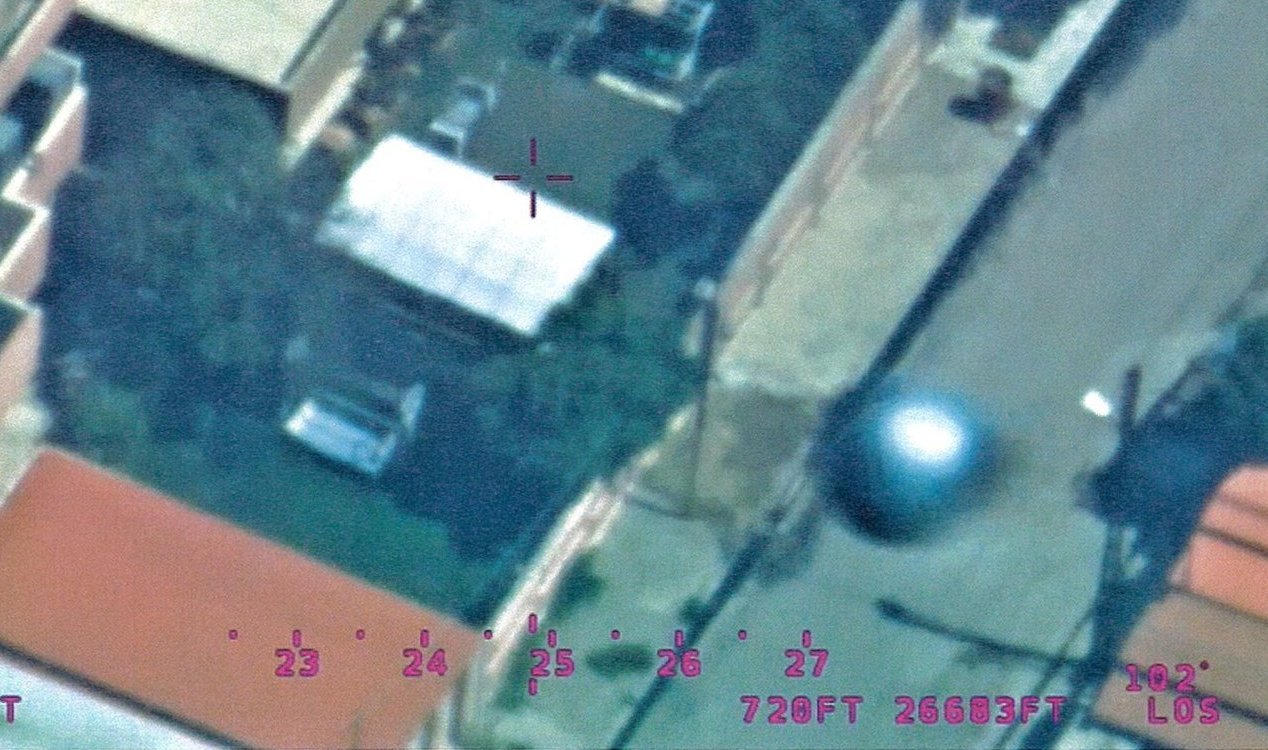 What is this object ? Image Credit: Twitter / Jeremy Kenyon Lockyer Corbell
This image was reportedly captured over the city of Mosul by an intelligence-reconnaissance plane back in 2016.
The intriguing photograph, which shows an unidentified object moving above the city's streets, is reportedly part of a four-second video described as a "short clip of an unidentified flying orb that appears to have a metallic shine on its surface."

The still was recently acquired and published by journalists Jeremy Corbell and George Knapp just before the premiere of their new podcast (viewable below).

According to reports, the original footage was part of a classified intelligence briefing video on the subject of UFOs that was shown to multiple US government agencies.

The case was also thought to be part of the Office of the Director of National Intelligence's (ODNI) Preliminary Assessment on UFOs which was released back in 2021.This is the first time that any part of the video itself has appeared in the public domain, however.

"These 'drones' operate 20-25,000 feet up in the air and they're flying around," an unnamed source told Mail Online.

"An operator will be zoomed in looking at a town in Syria. And all of a sudden, a little orb will go flying through the viewfinder."

"The operator's like, 'What the hell?' And so he starts focusing on it and he just watches the orb for a while. We might get it for 30 seconds, we might watch it for 10 minutes. And then it will do something remarkable, like suddenly bolt off the screen."

#34 Posted by Hankenhunter 6 days ago

Very cool vid. I didn't know about it taking two missiles to bring it down. I wonder if Russia will admit it if they are ET craft. I doubt it as full disclosure would effectively end the war against Ukraine. Looking foreward to discussing this. https://youtu.be/kiuTYprad5w

#35 Posted by Hankenhunter 6 days ago

You are gracious in defeat. Thank you for your kind words, and encouragement. Have a great day.

So do you think hes on the up and up or just a reporter wanting to cha ching off the ufo=aliens clique?

#37 Posted by Hankenhunter 5 days ago

I suppose at some point he might prove one of his claims ( paranormal, alien type ) but hes yet to do that just yet.

He's been at it for over 35 years with nothing to show for it. A complete hack that preys on the idiocy of the common person to believe these wheelbarrows of bullls*** he's constantly rolling out.

#40 Posted by Hankenhunter 5 days ago

The awards weren't in connection to anything about aliens or extraterrestrial craft. Nice try though. His lack of any substantiative evidence of anything in that (or any of the C2C bulls***) supports my statement.

#42 Posted by Hankenhunter 5 days ago

So, he's a good journalist until he reports about UFO's? Your statement is illogical. Nice try though.

To be fair His awards are not for proving anything that i know of even his work trying to expose organized crime iirc he never actually proved anything there his work in "paranormal" no. He didnt prove anything he presented it like fluff claptrap more like a documentary which are not about facts but about $$$.